Halfhill is an amazing and beautiful place. The Auchindoun of cooking, there is no better place for aspiring chefs to learn the intricacies of their trade, from delicate broths to hearty meats. And so it is there that we pilgrimaged to find the best recipes.

We met up with Lien Huo, a Pandaren mage and five generation farmer, to ask for her favorite food from the Valley of the Four Winds.
“My favorite comfort food is also the easiest!” She informed us gleefully, wheeling over an intimidatingly large cart. “Baked Eggplant!”
“First, you take a small eggplant, no more than thirty pounds, then you cut it into disks. If your soil causes bitter eggplant flesh, salt each side and let them sweat for about ten minutes before continuing.
Brush lightly with oil from a cooking-mop, generally this takes only about 1.5 to 2 gallons. Then using the ground crumbs from a dozen loaves of crusty bread, sprinkle each side.
In a roaring oven, bake for about twenty minutes. After twenty minutes, sprinkle with hard cheese and bake for another five to ten, or until the cheese is melted. This tastes even better combined with a good red tomato sauce!”
We helped her make this in the square, and it was definitely a group effort. Caiem tried to speed the process along with fel fire and while his effort were appreciated, he was quickly relegated to ‘guarding’ the plum wine.
In the end, even with a ‘small’ vegetable, we went through four barrels of tomato sauce, fed the square with enough left over for some of our fellow travelers, and had a small cart loaded up with stacks of the massive disks to take home.
However as we digested and unwound with sake and good conversation, a terrible crashing came from outside. Rushing out, expecting vermin to be invading for our scraps, we found instead Kat’s wolf Kasha and Zan’s raptor Zuvembi chewing on the last of the black rinds. The blinged-out felseed, Sparkles, was not to be found.
So back in Silvermoon, it was time to try it ourselves! 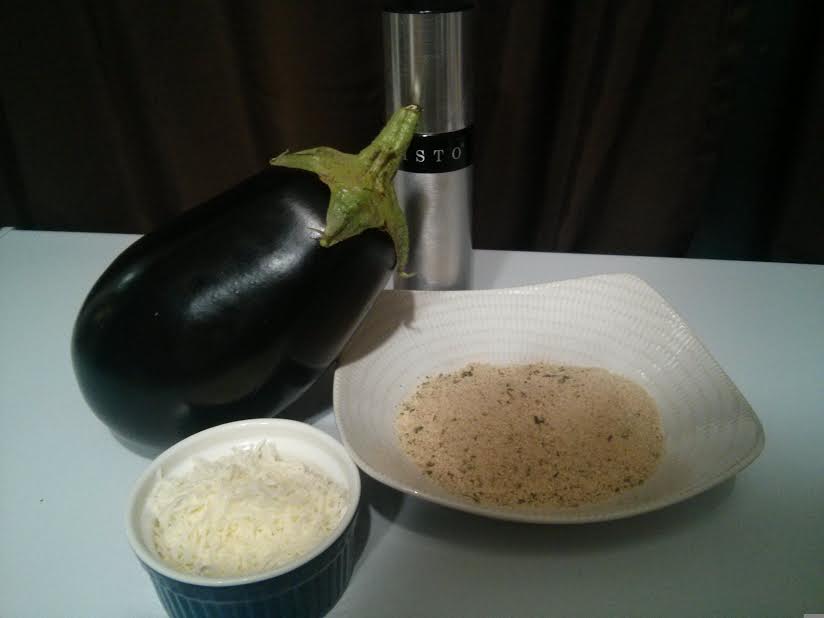 Using a much more realistically sized eggplant from Kat’s personal garden, we cut the beast into disks and spread them out to be salted.
Eggplants tend to be bitter, and while we discovered that the variety she grew is not as prone, it’s always a good idea to ‘sweat’ the vegetable. This helps soften tough meat and remove some of the bitterness. 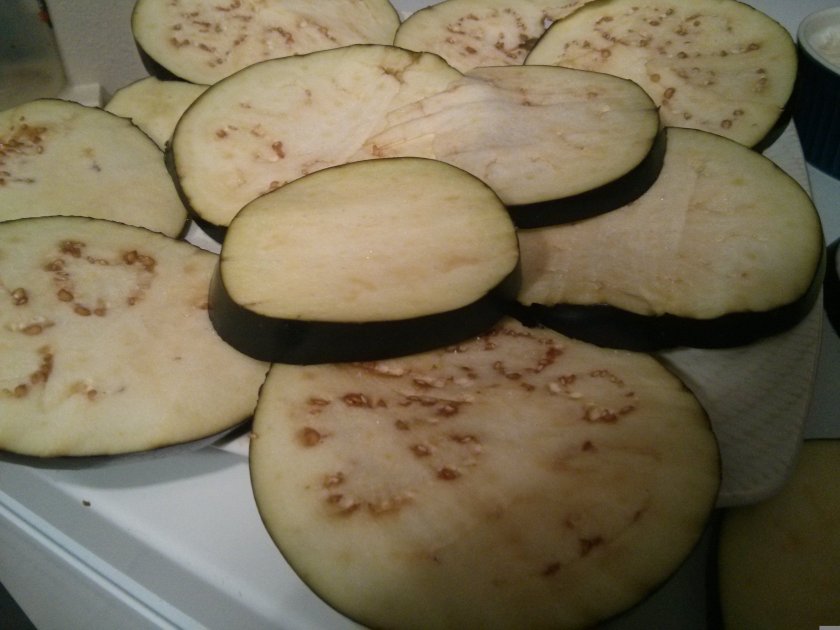 Eggplant is incredibly delicate and can start to brown within minutes of cutting. Don’t panic if this happens to you, it’s perfectly normal. Salting will help with this, and if it will take you a little while to finish preparing, put the slices in a bowl of salted water instead.
Brush each side lightly with oil. We used a hand pump oil spritzer to make an olive oil aerosol, which is fantastically fun to say aloud. Once lightly coated, sprinkle each side in breadcrumbs. For gluten-free, rice flour works as a good substitute.

Now into the oven! We found that 375 for 20 minutes works nicely. After 20 minutes, pull them out and sprinkle with cheese. An Italian blend is fantastic, but Zan’juul also enjoys this with a sharp cheddar.

Bake another 5-10 minutes or until the cheese is melty. Top with a nice marinara or eat it plain!

We’ve found that canines love this for some reason, so consider yourself warned.
Lien Huo’s Baked Eggplant
1 small eggplant, about 30 lbs (Or one medium to large Azerothian eggplant)
12 loaves of crusty bread, crumbled (Or about 1 cup bread crumbs. Can use plain, Italian or rice flour for gluten free)
2 gallons olive oil, for brushing (Or way, way less than that)
10 cups shredded cheese (Or 1/2 cup)
Bring oven to a roaring blaze (about 375)
Slice and salt the eggplant
Brush both sides with oil
Sprinkle both sides lightly with breadcrumbs
Bake for 20 minutes
Sprinkle with cheese
Bake an additional 5-10 minutes or until cheese as melted
Top with tomato sauce if desired, serve warm
Feeds a small army (or an army of 4, depending on the size of the eggplant)