Call the fuckin’ guards. Cuz this shit should be illegal.

Bacon. Cheese. Meat. More cheese. Dalapenos. And in a package bigger than a warrior’s fist. Light save me I’ve died and gone to heaven.

I feel like that wasn’t the most gorgeous picture, but let me tell you, this was the most fantastic thing I’ve put in my mouth since… well you don’t need to know about that. But served up by itself or with some roasted weird white vegetable thing that I’ve been promised is supposed to look like that? Oh Light yeah, we’re in business.

So on top of being just… so very very delicious… This thing wasn’t TOO hard to make. And it involved some fantastic stress relief.

First! Get your bird flesh. The butcher swore up and down these were chicken, but they were freaking huge. Close to a full pound each, no joke. You can of course use smaller breasts, or different birds! I bet a single young strider breast could feed an entire family (or two hungry adventurers).

Once bird is acquired — whack the everloving shit out of it. Sometimes if you buy your meat from passing adventurers, this part will be done for you. I recommend using a mallet or a hammer or a skillet — and put something slick between them so it doesn’t stick to your tool.

Then beat it down into oblivion. Really get your frustrations out. I was having a really shitty day when I made these, and lemme tell you this helped. Having something delicious to show for it after doesn’t hurt either, of course.

Once you’ve taken out the stress of the day and pounded it into a relatively uniform thinness, let’s up the yum factor with some seasonings. Salt and pepper are a must, but I used some garlic, onion and Orcish redpepper on both sides. You can be flexible with this, of course. If it smells good, it’ll probably taste good. Don’t be afraid to experiment.

I also trimmed up some of that fat just a little. Mostly cuz Oshu was staring at me.

So your bird flesh should be pounded flat and spiced on both sides. This is where we start to stuff it. Now, I actually didn’t anticipate these being THIS big when flattened, so I had to try a few different folds to see what would work best. I really recommend you do the same.

At this point, get a chunk of creamed cheese and cut yourself a slab about the width of a human pinkie. Or an elf pinkie. Or a gnomish thumb, I dunno, it’s not an exact science. Once you’ve figured out how you’re going to fold it, lay it down the middle so that it’ll be against the interior fold.

Soooo, as you can see I had to play with the placement a little, but I finally decided on lengthwise. I didn’t season the cheese. I’m just a fuckup. Deal with it, I have to live with myself every day.

While not touching your eye, layer the chopped Dalapeno onto the cream cheese. I think for four of these, I ended up using about three good sized Dalapenos. Again. Eye. Don’t touch it.

Once you have successfully loaded your Dalapeno without touching your eye, it’s time to move to the cheese. No real preference to this, you can use a marbled jack, a farm cheese or a cheddar. I had some jack shredded for a customer’s order earlier, so I used that. The cheese will act like the glue to hold this together.

So, could you mix this all together beforehand, potentially saving any eye-touching, and stuff it like that? Yes, but the reason I didn’t do that is because if the cream cheese is in a big thick chonk, it is less likely to melt everywhere and instead stays properly stuffed.

In case my blatant foreshadowing wasn’t enough, it was actually at this point where I touched my eye. It hurt. So very very bad. It didn’t even matter that I’d washed them. I don’t think it would have mattered if I Cleansed them.

Do not touch your eye. RIP Jax’s eye

After I’d stopped screaming and was able to take my head out of the fountain, I folded these over and wrapped them with bacon. This is not a perfect science. It took about 3-4 slices of bacon each for these, but again, they were just obscenely big. 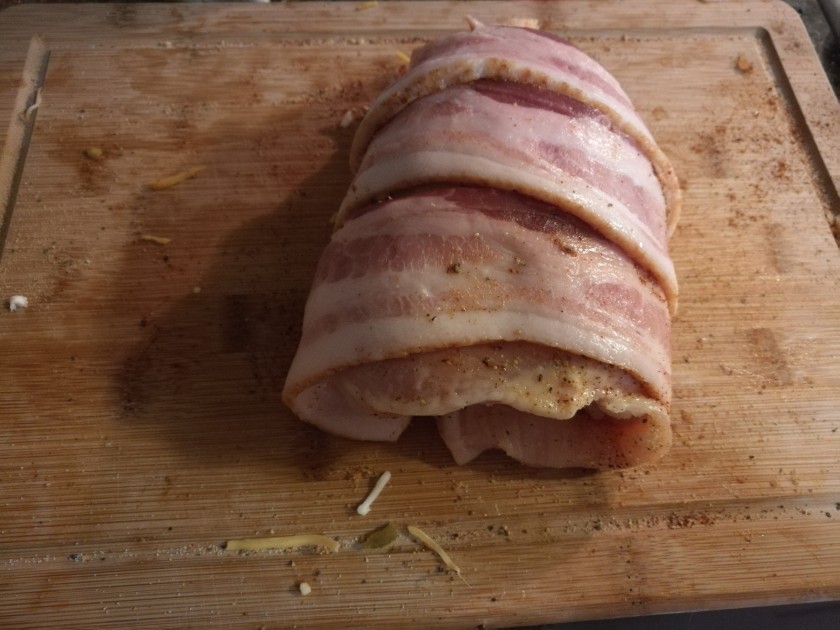 I feel like I did pretty good for being a sudden cyclopse, so if yours doesn’t turn out pretty, don’t worry. Once this sucker starts cooking, no one will care because let me tell you, that smell is insane.

So get your oven to about mid-high heat (400F), put them on a baking sheet and cook for about 30 minutes. Check after 30 to make sure they reach an internal temperature of at least 160. If they aren’t there, go ahead and cook them longer.

If the bacon isn’t your desired crispness– go ahead and cook it longer! One of the awesome things about this is that because the fat from the bacon continues to baste the bird flesh, it will keep it from drying out and can handle going a little longer.

Once fully cooked AND to your desired crispness, go ahead and let it cool before digging in. These were a practice special and I’ve been getting orders for them ALL WEEK!!

So good. Swing by the Keg and I’ll whip you some up!

2 thoughts on “Meal of the Day: Dalapeno Popper Chicken”