Since I’ve been shot, I’ve been a bit obligated to actually pay attention to what Mrs Jean Bendon is trying to teach me. On top of the potions, which I might talk about later, she’s been keeping a poultice on the injury. Since she showed me how to do it, I’m gonna show you. Before anyone asks, no I’m not showing my wound. It’s gross no one wants to see that.

You need three herbs that are pretty common, and honey to bind it. The Thalassian name is in the… Curvy things. 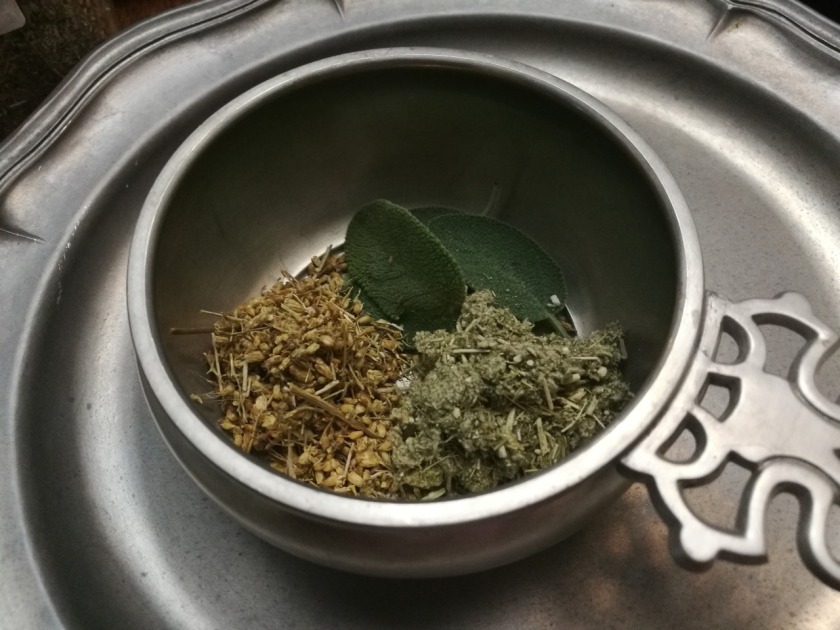 The leaves at the top are Mountain Silversage (white sage). Personally, I love that crap. You can use it for cooking and it makes shit taste good. But it’s really super good for infections. The first day or so I started getting sick and the wound was apparently getting infected. Jean took a whole bunch of these leaves and chewed them up, made me chew some too. They made my mouth tingle. Once they were all broken, she just wadded it into the injury.

It made the skin tingle and stop hurting and when I woke up the next day, it itched like crazy. I don’t have a way to not be gross about this, but when we took it off, the infection had come out and the fever broke. Very cool.

The fluffy green stuff is dried Bruiseweed (mugwort). From what I understand it’s for pain relief, speeds healing and helps with bruises and tenderness. It can see a difference on areas where the poultice is as far as the bruise fading. Apparently pregnant women should stay away from it cuz she keeps asking if I’m pregnant. It was funny the first time. She also said something about counter-hex properties but I was too busy being unamused by the fifth pregnancy jab.

Grind it up, mix with honey, slap it on the wound, profit.