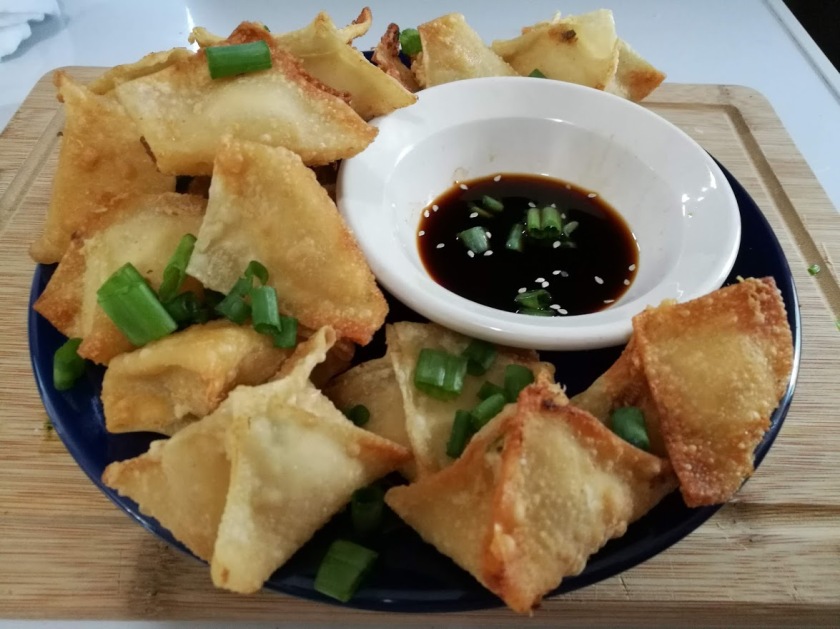 This one has a bit of an odd story behind it. My birthday was a few weeks ago, and I decided to head to Gadgetzan in Tanaris as part of the celebrations. While there, I came decided to wander through a few shops. I came across a very nice Goblin and we got to chatting. He was very interested in my little project here, and asked to sponsor it. I told him I wasn’t really comfortable without knowing his products a bit better so he gave me a free sample.

After the exchange (there were the usual customs fees, brokerage fees, a currency exchange fee to move from Stormwind gold to Bilgewater gold, and of course, a small fee for mismatched coins, as I had a few Ironforge coins mixed in) I was given a rather interesting can of Duskwood Style Dusky Crab Lumps, courtesy of Kwality Katch.

Kwality Katch! It says ‘Kwality’ right in the name

This is one of those weird situations where I’m going to be using the LESS extra version and you can upgrade as wanted. While this turned out just fine, it would probably even be more delicious if you used refrigerated crab or even fresh crab in lieu of canned.

Alright so let’s get to it! Cast of characters! Two green onions. I used the white, finely minced, and about half of the green, leaving the rest of the green for garnish. You also need some about 3×3 inch wonton wrappers. I cut down the same wrappers I used for eggrolls which got me to the right size. You also need 8 oz of cream cheese, 2 tsp each of soy and fish sauce, and three cloves of garlic.

And of course, the canned crab. At least I think this is crab… It’s says ‘less than 100% murloc’ which… I mean I’m sure that’s just fine, right? You don’t want murloc in your food, usually. …Regardless, this can was 4oz dry. Honestly, I would either cut the cream cheese in half or double the crab for stronger flavor. This turned out nice though.

I mean… you really can’t help but trust such an adorable face though. So open and drain your crab, instantly attracting every single stray cat in the area (and a few druids). Add them and the softened cream cheese together in a bowl.

Mince up your garlic and your green onions, get them as small and fine as you can, because you’re not going to want to cronch into a huge mouthful of garlic or onion. It might be of an intensely flavored surprise.

It was about this point that I realized that my bowl was not nearly big enough. So I swapped it into a bit of a deeper bowl, because if you’re anything like me, trying to stir this would be inviting disaster.

Into the bigger bowl, and add your fish sauce and soy sauce. Some recipes call for sugar, and if you like your rangoons a bit sweeter, add about half a tablespoon of white sugar. Me? I like it savory, so I omit this.

Mix it all up. And then the crucial step that I personally missed — Chill it for about an hour. This will let it stiffen up a little and be considerably less soupy and easier to fold up and keep contained.

Once it’s chilled, now it’s time to fold them up.

Put a teaspoon’s worth in the middle of a square. Yours will be more chilled and less liquidy.

Pryn has expressed concern about the ingredient of ‘preservatives’ on the can. She said it’s not very specific. She says she bets it’s gasoline. But I know that Kwality Katch only puts the finest ingredients in their products. Plus a lit a match near it and nothing happened.

Wet all the edges with a little water. I just use a fingertip dipped in water and run it along the sides. Then take two opposite sides, fold them up and pinch closed.

Bring the other two sides up and press them together to form sort of a star shape. Try to make sure there are no holes and no major air pockets.

Do this with all the remaining wrappers. I used half of my filling and got 20 little rangoons. It takes a few tries to get it down right, but then it gets easier.

Look at those lovely bitches. I should have pinched the corners a bit tighter. Ah well. Get some oil going.

Fry these at around 350F/170C until they are crispy. You can tip them to fry the top tips — tiptops? — but it’s not entirely necessary.

Serve with a bit of soy sauce, make it look fancy with some green shit. Absolutely delicious.