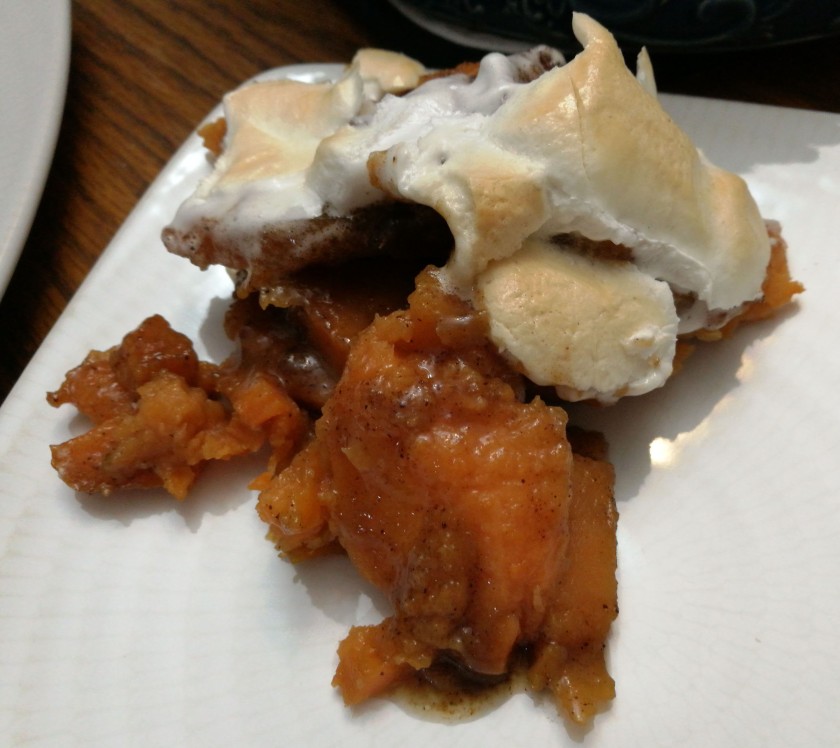 Sweet potatoes, cinnamon, sugar and toasted mallows. Is there anything more delicious in the world as a side? Vibrant orange with a crunchy crust of goblin marshmallows, these are easily one of my favorites for Pilgrim’s Bounty.

I think everyone has had candied sweet potatoes — they’re everywhere! One thing I’ve noticed when living in the various Cities is that quality can really vary. When I was in Mulgore, they were thickly chopped, lightly sweetened and drenched in sticky honey.

In Orgrimmar, they came pre-cooked in ration cans but with the delicious addition of toasted marshmallows, thanks in part to our Goblin allies.

Now that I’m in Stormwind, I decided to combine the best of both worlds — fresh yams and marshmallow topping. Light save you if you have a sweet tooth, cuz this will hit it. 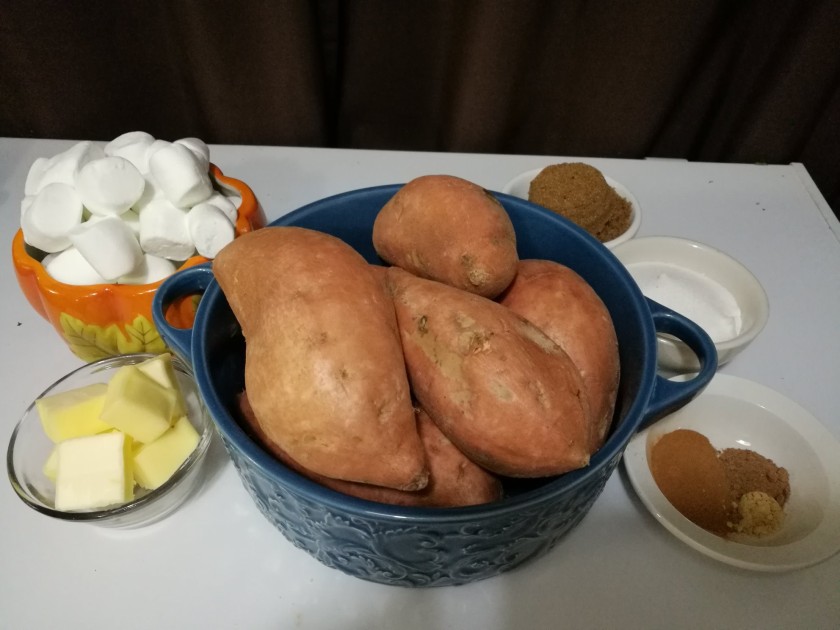 Here’s today’s cast of characters: 6 sweet potatoes, straight from Mulgore (if you have another source, tell me, cuz with the war it was S P E N D Y to import these), a bag of Gobo-Mallows — you don’t have to use that brand, it was just the first one I found in the Trade house. These are full sized, I cut them in half before topping. I hear there are also Lil’Gobos which are smaller and might work better.

Some people, usually Taurens or Kal’dorei will tell you that you don’t need marshmallows. These people are wrong. Yes, you can technically eat them without the amazing crunchy sticky toasty top — but are you really enjoying it then? Don’t you owe it to yourself?

We also need a full stick of butter (1/2 cup or 100g), 3/4 cup each of dark brown sugar and white granulated sugar (143g each) and a mix of Autumn spices. If you can’t find Autumn spices, I made mine with 1 Tbsp cinnamon, 1/2 tsp ginger and 1 tsp nutmeg. Also have about 1 Tbsp of vanilla extract handy. 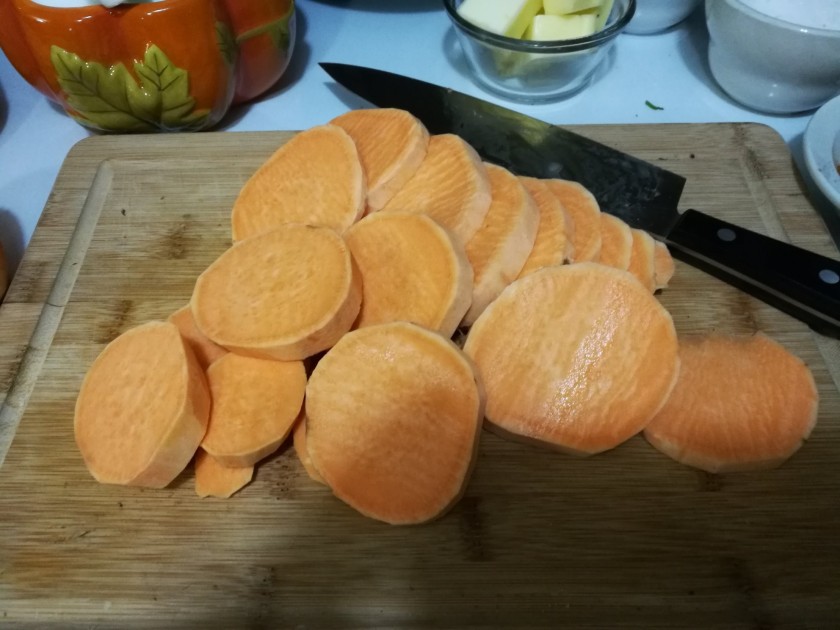 Peel the sweet potatoes and chop them up into disks. I like to think that they’re big counterfeit coins. I kept them around a half centimeter thick. You can also cut them into chunks, but I did it this way for reasons that didn’t pan out.

Okay so I wanted to bring this dish to Pryn’s parent’s for Pilgrim’s Bounty and hopefully they’d resemble gold coins and then they’d be like “Wow what a clever and delicious dish!” but it didn’t work out that way. Hopefully they’ll still like it. Probably not but whatever. 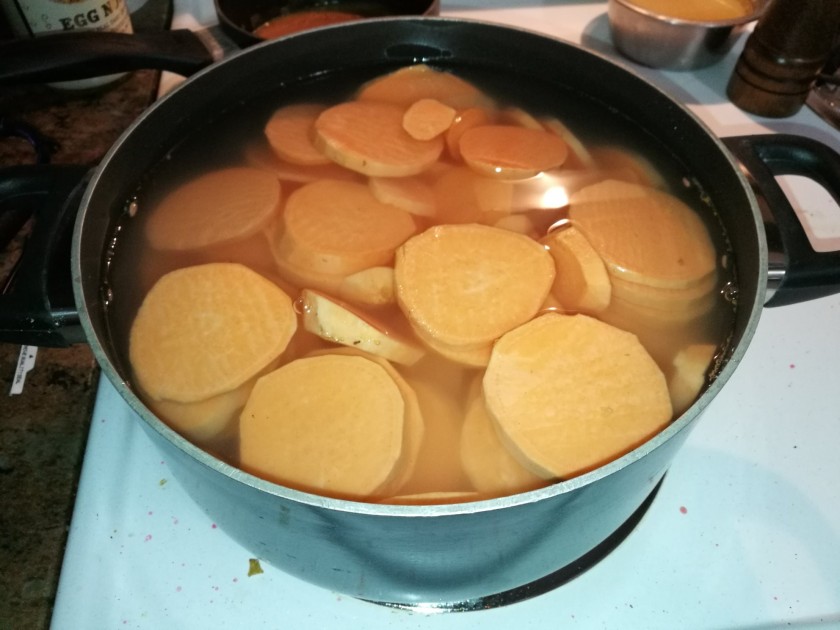 In a big ol’ pot of water, bring them to a boil. Let them boil for about five minutes – you want them not quite cooked through because they’re still going to bake. At the same time, get your candied syrup going.

First, melt down your butter in the saucepan. All of it. Once it’s melted, add in both sugars and turn the heat to low. You want to get it mostly melted, but it’s still going to be pretty grainy. When it’s combined, add in the seasonings, including the vanilla. 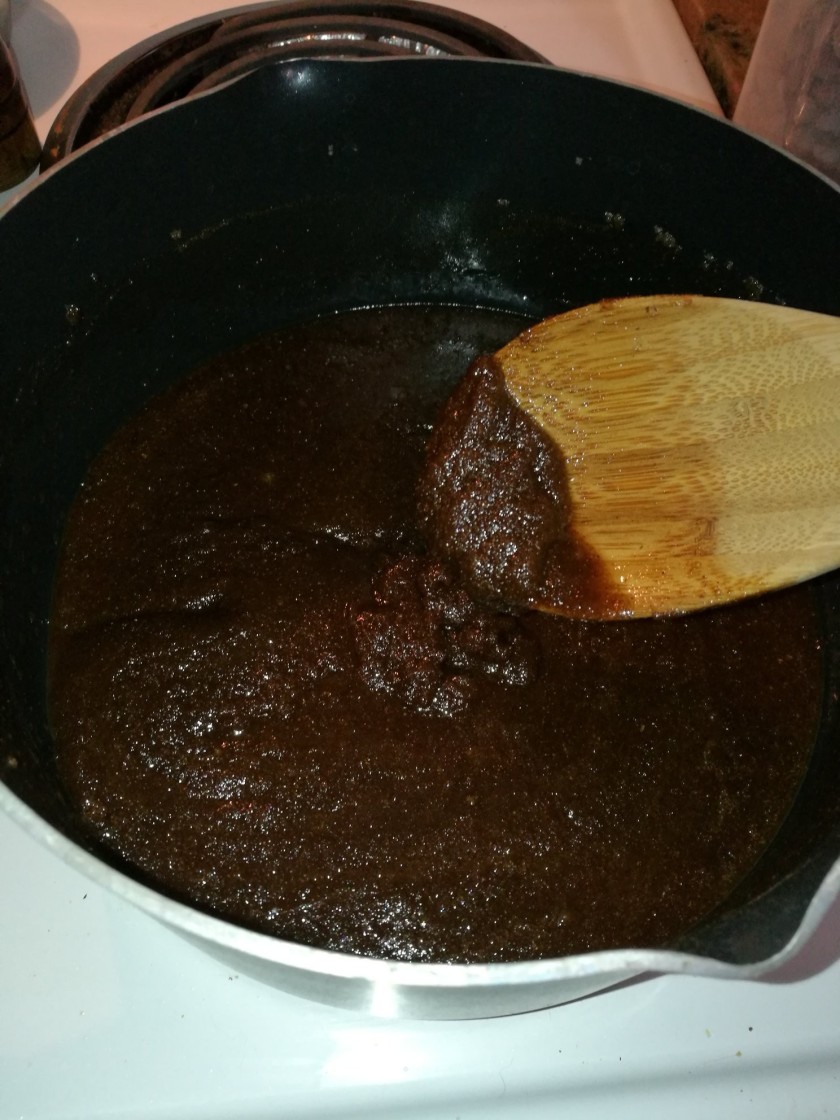 About like this. Once the potato coins are done, drain them and mix together. I overcooked my coins, which is why the whole presentation didn’t work for me, but they still turned out delicious.

Mix the candy into the potatoes to coat. It is going to start smelling just amazing right about now. Just… so amazing. 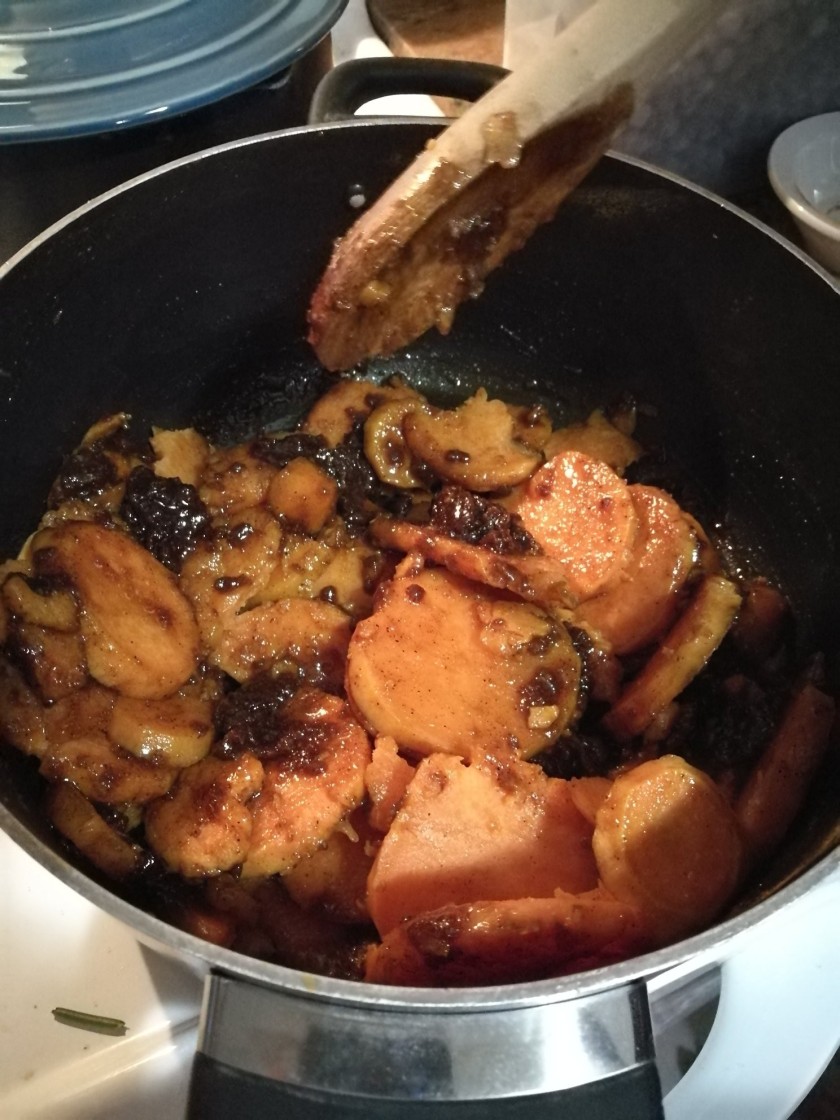 Fun fact – if you’re cooking ahead, you can actually stop here, stick it in a cold box and it’ll be ready for the next morning. That’s what I ended up doing, because let’s face it, this week had a LOT of cooking to do. IF you decide to cold-box it, make sure the dish warms back up to room temperature before you put it in the oven for the final steps. There’s always a chance that the heat difference might cause the dish to explode. Think of it like hitting an ice elemental with a fire blast. Except it’s your good dishes and now Colin is mad at you.

When you’re ready to finish, put the yams uncovered in a 375F/190C oven and bake for about 20 minutes. They will be nice and bubbly. Take them back out, and cover them with the gobo-mallows like so: 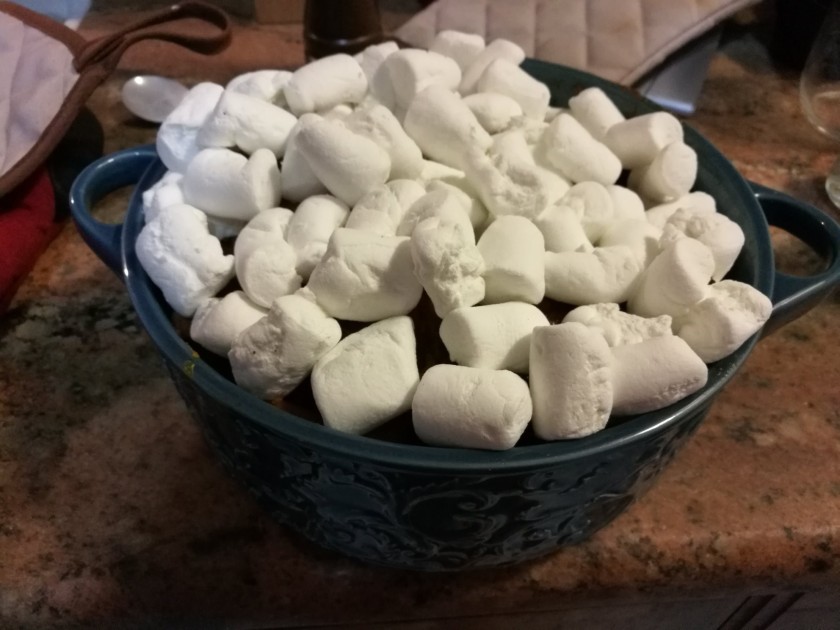 Put them back in the oven at the same temperature and let them toast. The time may vary, so start checking at about 10 minutes. You want the mallows to melt slightly and toast up on top. This is going to create that just… Light it’s so good I swear. It’s gooey in the middle and crunchy on top and when you go to scoop it it has this hard shell that you have to break and — hnnnnngh! So good. 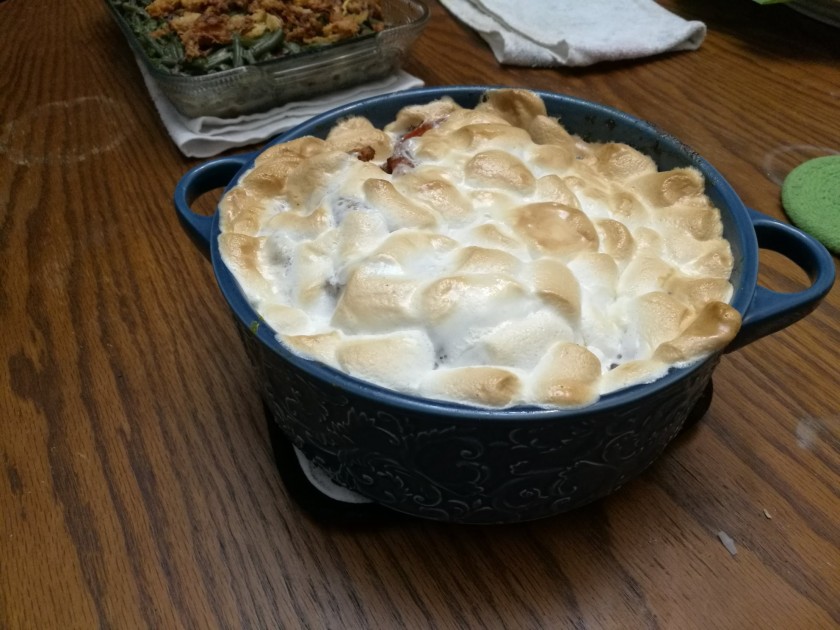 Light how I wish I could say this is my favorite dish. It’s amazing. It’s impossible to stay out of. It’s something I will make every time I have an excuse. And best of all it’s really easy. But if you want real mind-blowing deliciousness, come back tomorrow.