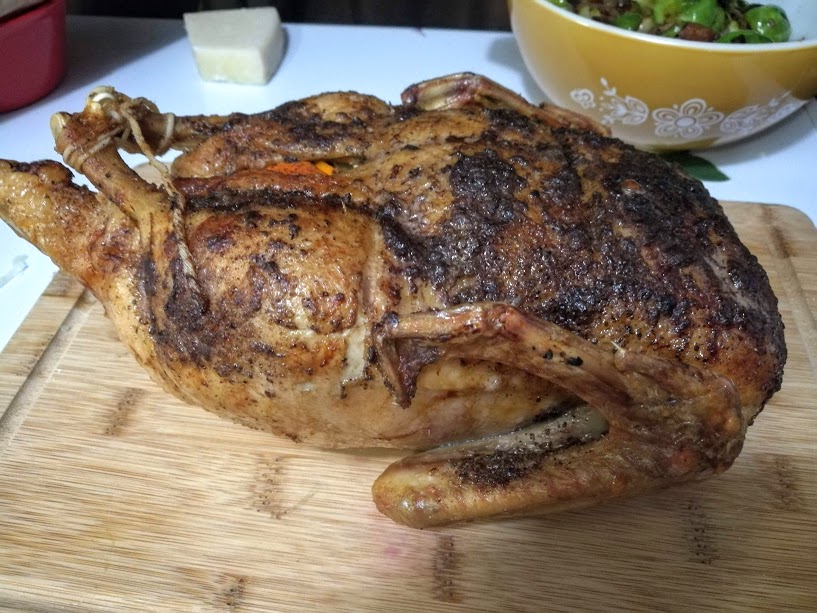 This has been a week of new traditions, and some I’m going to share with you. Every race has different traditions on how to ring in the New Year. When I stayed with Mahina, she showed me the Tauren tradition of drinking copious amounts of mulled wine, sitting around with loved ones grinding grain together by hand and telling stories of our shared past. Once there was enough grain, they would bake it into a cake with a copper piece hidden somewhere inside and share it together. The person who found the copper would be in for an extra-blessed year ahead.

Colin told me that this year, we’re going to make roast duck. He says that when the world is cold, the ducks get fat, and they come bringing luck on their wings. So that our future can really soar, we take their essence on the first day of the New Year.

This is how we do it.

Alright guys, by now you know how this works. Cast of characters!

First, we have a 6 lb (2.75kg) duck that Colin bartered off of a hunter. He said it’s fine to exchange gold for one, but by bartering, everyone gets something nice so it encourages generosity. I asked what happens if no one is wanting to trade duck, and he said to make sure to tip the butcher.

There’s a lot of like… symbolism in this holiday. Colin said that it’s good to practice being mindful in everything we do.

We also need an orange, which we’ll quarter, a head of garlic, two stalks of celery, and spices. For this we used a tablespoon of salt, 1.5 teaspoons of black pepper, and a teaspoon of paprika. I also found some Suramar sumac that I’ve been aching to use so I used that too, but it’s not required. It has a nice citrusy flavor and it’s mana-infused so it benefits elves and non-elves alike!

…shut up I just really wanted to try out that spice.

First we have to prep the duck. The hunter had already plucked it to sell the feathers elsewhere, but he left some pinfeathers which we had to remove. Colin says you don’t have to, but especially if you’re cooking for loved ones, you want to bring in the year with perfection.

Also I forgot to get a picture of this, but you can see the little pierce marks on the duck? We want to puncture the skin every inch or so. This is to help the fat render and give it a place to leak out. Duck is a very fatty meat, but it’s a very delicious meat.

…You know, the docks around Quel’thalas has a lot of seagulls, I wonder if they taste similar…

So I was super apprehensive about this step, but do it. I trust Colin and it turned out good, so do it.

You want to get a big stock pot, one that’s big enough to hold the duck and get water boiling. Once it’s boiling, after you’ve punctured the skin, boil it for about 10 minutes. I recommend turning the heat down cuz I accidentally browned part of the neck skin, but Colin said that that’s ok, because it means that even though we might make mistakes, the year will still be great overall.

While that’s boiling, preheat the oven to 425F/218C and then go ahead and prep the rest of your ingredients for this. Quarter the orange, trying very hard not to just eat them because citrus is made of magic, and cut your celery into chunks, and take all the paper off of the garlic, then cut it so the cloves are exposed.

By now, your duck wil be ready to take out of the water. Allow it to cool and pat it dry. The pokes you made with the knife should be a bit opened, which doesn’t make any difference aside that I thought that was pretty neat.

Once it’s cooled down enough to handle again, mix up the spices and ruin the pretty scheme you had going, and rub it inside and out. You might have a bit extra, because I did, but just do your best.

After you’ve seasoned, take the celery, garlic and orange and stuff it into the duck cavity. Start with the garlic, cuz once you start cramming everything else in there it gets hard. I did this out at the bar and my friend Em spent the entire time making innuendos.

So I had some trouble getting everything and Colin had to come over and help, much to Em’s delight. He said that it’s already dead, you can’t hurt it any more, so to just cram it in there as hard as you can.

Then we proceeded to truss it.

Basically, using butcher’s twine or similar, bring the legs up and tie the ‘ankles’ together to keep the insides closed. If you don’t have someone to help you hold it, I recommend a slip knot.

After 45 minutes, bring the duck back out, drain off the fat to use later, and flip it over. This was a two man job involving tongs, spatulas, and Em, but Colin said we were being ridiculous and flipped it with tongs like it was nothing so…

Flip it over upside down and pop it back in for another 40 minutes. This is so that the fat can drain better. It will also drain some citrus-garlic-duck juice out, so just let that drain into the pan.

After the 40 minutes are up, take it out and flip it over one more time. This time try and do it fast to avoid making Colin mad, and almost drop it on the floor in the process. Get Em’s help for real.

Finish it off by roasting for about 15 to 20 minutes. Using your handy dandy thermometer, make sure the meat gets to about 165 before taking it out to cool.

Let it rest for about 15 minutes and then carve!

And may luck fly your way this coming year!