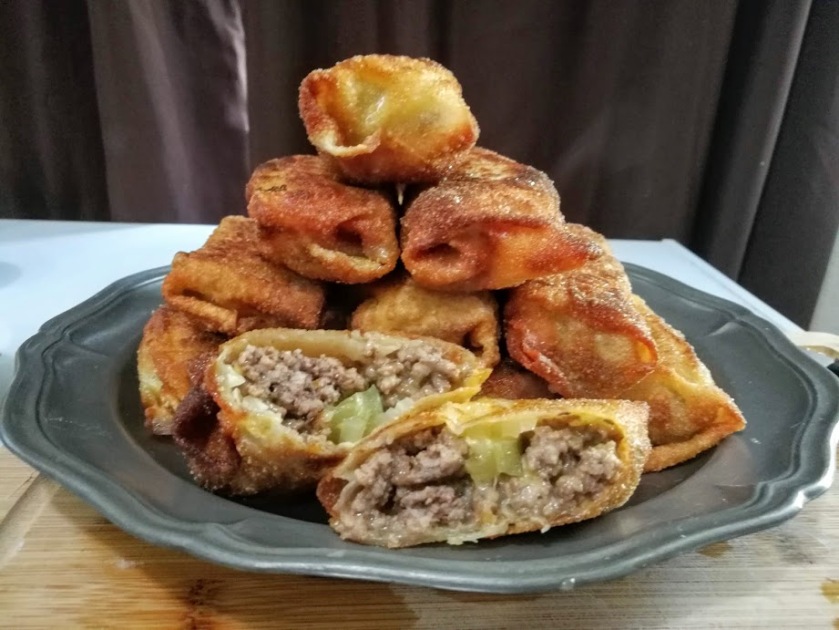 When I was living on the streets, food was hard to come by. I would go days without eating, and even when I did get a chance, more often than not it was scavenged from rubbish bins. A memory I’ve held very close was my first cheeseburger. I remember the sauce running down my chin, the cheese and grease exploding with flavor in my mouth, the crunch of the onion, the sourness of the pickle. It was so foreign to me, fluffy buns and thick crumbly meat. I hadn’t eaten much Human food before that and elves don’t really have anything quite like it.

The only pain is that it’s a bit hard to take on the go. While making the Pandaren egg rolls, I was stricken with an amazing idea. All the deliciousness of a cheeseburger in the convenient package of an egg roll.

My favorite thing about this is how customizable it is. I made these a few different ways, but I’m going to show you my base. Add or subtract whatever suits you!

For this, I was making 12 eggrolls, so I used 3 slices of melty Steamwheedle cheese (cut into quarters), a pound (500 grams) of ground beef, about another cup of shredded colby jack cheese, 1 Tbsp of Darkshire sauce, three cloves garlic, and enough pickle and onion to suit the inside of each one.

Brown up the ground beef (or whatever animal you’re using) and when it’s just about done, drain it and add the minced garlic and Darkshire sauce.

Also take the time to cut your cheese into quarters. The easiest way I found was to cut it in half, and then each half in halves.

Now that the meat is done, mix in the shredded cheese. I love things extra cheesy. This is also a good place to crumble up some bacon or anything else you’d like to throw in.

Now it’s time to shape the egg rolls. Just like we did for the traditional ones, lay the wrapper with a corner facing you so that it’s shaped like a diamond.

Then add the cheese, onion and pickle or anything else you want to add.

Easy enough. Now put down the meat. I did these a few different ways, including adding the condiments to the roll itself or having them as a dip on the outside. I gotta say, having them in the roll was really good. I did a few with barbecue sauce, and some with just mustard and ketchup.

Both ways are valid. Now to roll. Take the bottom corner and roll it up to sort of compact the meat under it like a blankie. Then wet the two top sides and fold the corners in. Finally, roll it up and set it seam side down until you’re ready to cook.

Heat up about an inch to an inch and a half of oil and gently fry. These things cook up fast, so keep an eye on them and roll them over to get both sides even.

And voila! Easy, right? Man these are tasty and the hardest part is the folding — trust me, it’s easier than it looks. And it’s good practice for other rolled and folded treats!

Unlike the egg rolls, I actually got to have my fair share of these!