So back on the topic of New Year’s traditions. We have poultry so that luck will fly to you. We have something green or orange for money (bank notes and gold respectively). Last but not least, we have something that takes a little bit of time and a whole lot of patience. Colin says that of course, is to always remember that good things take time. The Tauren have their cake ritual, but in Dalaran, Colin says, it was risotto.

What are the traditions of your family? What do you like to do during the New Year?

I have to say that risotto was a bit daunting to  me. It’s always been the fanciest of the fancy, no one asks for risotto outside of ya know… High ranking people. But just  like doing a deglaze and a flambe, it turns out this really wasn’t that hard. Vynluthein helped out, but… well we’ll get to that.

END_OF_DOCUMENT_TOKEN_TO_BE_REPLACED

When Colin told me that the second thing we’d be making for his traditional New Year’s meal was sprouts, I was… hesitant.

Sprouts are actually in the same family as cabbage, which is why they look and taste like itty bitty cabbages (See Mrs Bendon? I do listen!). I’ve had them before in Darkshore when I was staying with the Bendons but they uh… They weren’t great. They kinda tasted like mushy little balls of fart. Gilnean cooking involves a LOT of boiling and no offense to the Bendons and their incredibly generous hospitality, but not everything does well being boiled.

Colin said that the green represents bank notes which are apparently a big thing in Dalaran. And I guess Gadgetzan, cuz Pryn uses them to. They’re like gold but lighter? Anyhow, and the carmelized onion represents gold. So it’s to bring good fortune to the new year. And the bacon represents… deliciousness. I guess. Always having enough to eat? Yeah let’s go with that.

Either way, these are WAY tastier than fart-sprouts and just as easy to do!

END_OF_DOCUMENT_TOKEN_TO_BE_REPLACED

This has been a week of new traditions, and some I’m going to share with you. Every race has different traditions on how to ring in the New Year. When I stayed with Mahina, she showed me the Tauren tradition of drinking copious amounts of mulled wine, sitting around with loved ones grinding grain together by hand and telling stories of our shared past. Once there was enough grain, they would bake it into a cake with a copper piece hidden somewhere inside and share it together. The person who found the copper would be in for an extra-blessed year ahead.

Colin told me that this year, we’re going to make roast duck. He says that when the world is cold, the ducks get fat, and they come bringing luck on their wings. So that our future can really soar, we take their essence on the first day of the New Year.

This is how we do it.

END_OF_DOCUMENT_TOKEN_TO_BE_REPLACED

Winterveil is really ramping up, and I gotta say, I am enjoying it immensely. I’m going to be honest, this is my very first Winterveil and I was really nervous about it. I didn’t know what to expect, I didn’t know what was coming. Big dude in a red suit knows if you’ve been bad or good? He knows everything about you? He can see into your soul and judge your sins?!

But I spent some time in Silvermoon this week with my brother Vyn and his fiance. I asked him if he wanted me to make a traditional Winterveil dinner for them but he said no.

END_OF_DOCUMENT_TOKEN_TO_BE_REPLACED

No no. The hardest part was not eating it all. Oh by the Light it was so good. And every few minutes I’d think “Oh just one more won’t hurt. There’s plenty. I have to make sure it’s not poison after all.”

And eventually, while (presumably) not poison, the fried onions became less for the recipe and more to sate your growing addiction.

END_OF_DOCUMENT_TOKEN_TO_BE_REPLACED

But one thing I could always count on was Pilgrim’s Bounty. There was always so much food. Just everywhere, beautiful, delicious, limitless food and no one looked at me funny for eating as much as I could literally stomach or more than ‘my fair share’. I was just another person appreciating the fruits of the harvest and the hard work of all the chefs. END_OF_DOCUMENT_TOKEN_TO_BE_REPLACED

So Hallow’s End is over and there are just so many pumpkins everywhere. What do you do?! You EAT them that’s what!

END_OF_DOCUMENT_TOKEN_TO_BE_REPLACED

EDIT – Updated with Gnomish measurements as well as Goblin. Sorry, I learned with Goblin.

So this one is a little later than I wanted it to be? Why? Because yesterday was Hallow’s End. Oh my Light, I’ve never experienced a Hallow’s End before — well. I mean. I kinda had? But it was mostly running in fear from the people acting weird and suddenly there’s a fucking Horseman??

I could go on and on about Hallow’s End — and maybe I will! But for now, my apologies for the lateness. Apparently they weren’t joking when they said if you ate too much candy you’d get sick.

But what I actually wanted to talk about was this. I call it Lordaeron Surprise.

END_OF_DOCUMENT_TOKEN_TO_BE_REPLACED

Not gonna lie, these are kind of my favorite thing right now. Not to eat, oh Light no. But to watch others eat. 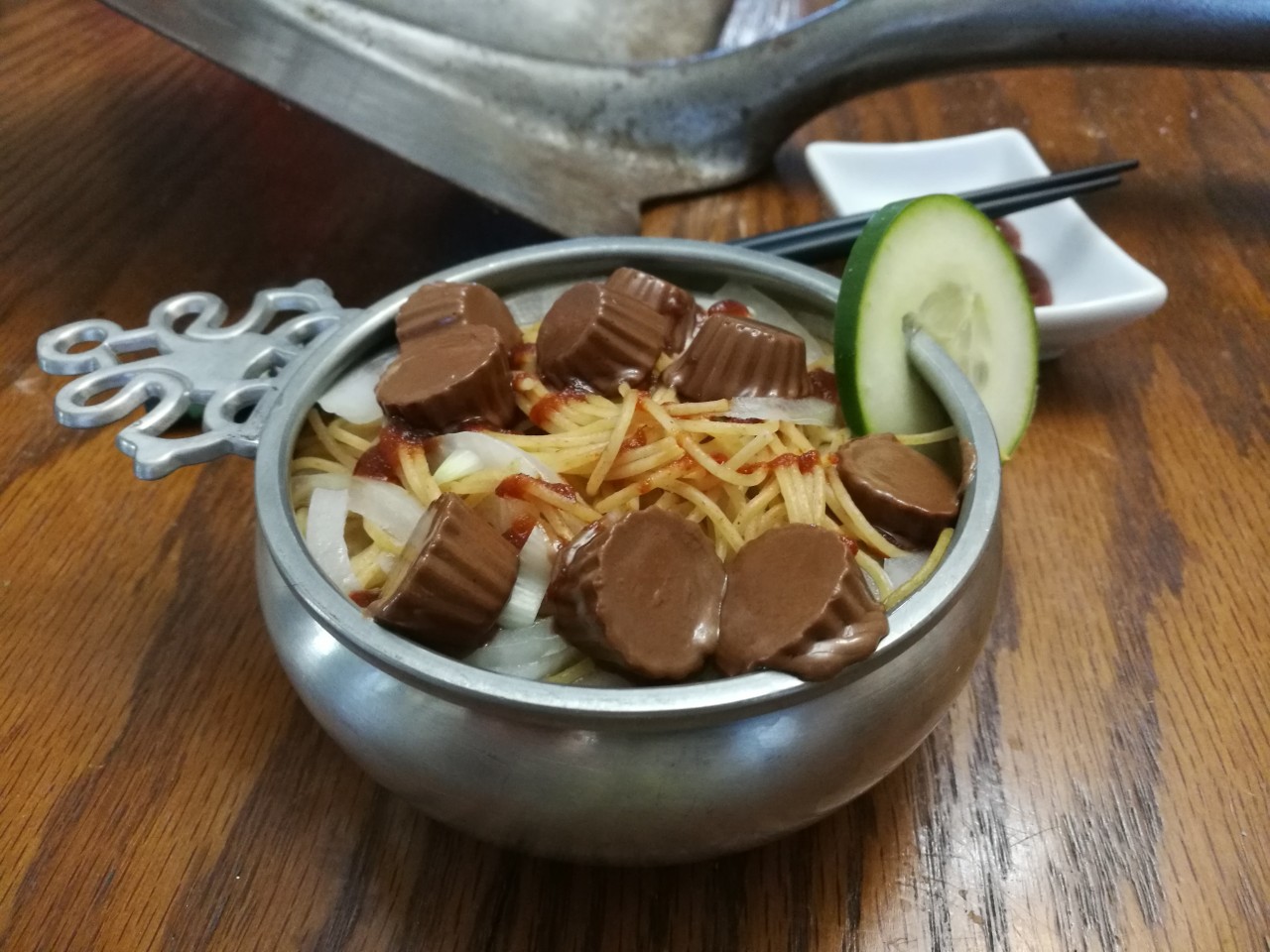 So what you’re looking at is Pandaren noodles in a very spicy broth, accented with, soy, fish sauce and pho seasonings and more Pandaren red spice. Extra onions and topped with peanut-butter cups.

In celebration of me getting shot in the fucking stomach. Never forget.